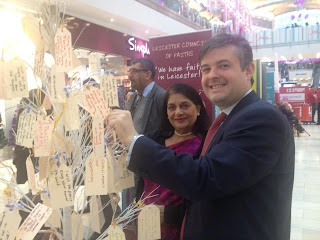 Sixth day of our week-long exhibition in Highcross for Inter Faith Week. Jon Ashworth MP (Labour, Leicester South) makes a scheduled a visit to the exhibition at 1400. 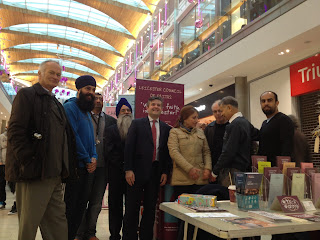 I'd been contacted by Jon's office before the start of Inter Faith Week in response to my invitation and asked to gather together a few members of different faith communities with whom Jon could chat for half an hour or so. Friends from the Bahá'í, Hindu, Jewish, Muslim and Sikh communities respond to the invitation and turn out to meet him. 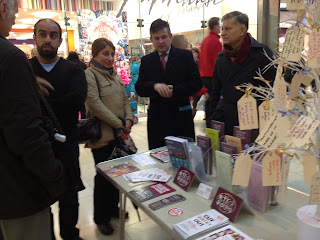 Jon made a similar visit to our Highcross exhibition during Inter Faith Week last year (see blog post, 26 November 2011). We're glad that he continues to show his public support in this way. He speaks in a supportive and sympathetic manner to those attending, and his words are well received. Since he speaks about the going importance, relevance and significance of the Council of Faiths to the city and people of Leicester in these troubled times, I decide to take the bull by the horns and talk to him about our crisis of funding. I think he's shocked to hear how precarious our situation is right now and offers his assistance in whatever way he can to help us navigate our way through our current peril. I'll be making sure we take him up on that! 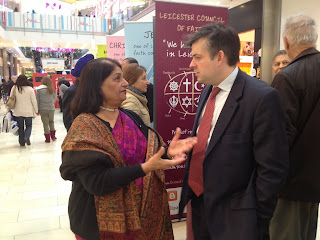 Shortly after his visit, Jon tweets (along with the photo at the top of this blog post) to his more than 5,200 followers:

The photo at the top of this blog post shows Jon hanging his label on the tree - which is getting pretty crowded by this point. Next to him is Cllr Manjula Sood, Chair of Leicester Council of Faiths, also together in the photo above. 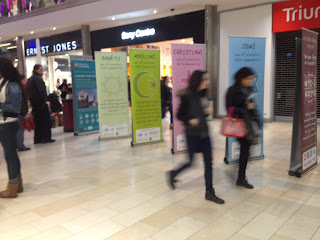 You can see how Jon's visit is written up on  his own website. Between three of us - Jon, Radhika Madhani (his PA) and me - we put together a press release for the Leicester Mercury, sent it to their newsdesk ahead of time and asked for a photographer to cover Jon's visit to the exhibition today, but they didn't bite. 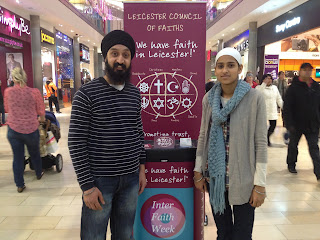 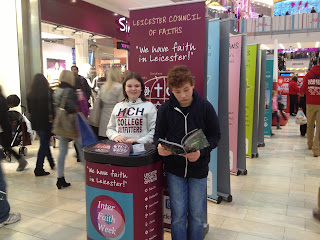 Today one of the members of the Council of Faiths asks which of the Jewish communities in Leicester I belong to: the Orthodox or the Progressive. Another recently expressed the assumption that I'm Catholic. I've also been asked if I'm a Jain. I wonder what I might be doing that leads them to their conclusions? Given my role with the Council of Faiths, I'd consider it inappropriate to foreground my personal faith. That would be improper, since I'm employed to serve the Council of Faiths as a whole and each of its member communities equally. On the one hand, I've never denied or hidden what I am, or done any kind of dissembling about my own beliefs. On the other hand, I believe I'd be abusing my position if I did any kind of special pleading for my own faith or the community I belong to. I'm not surprised that some members of the Council of Faiths don't know what religion I am - and that's alright. 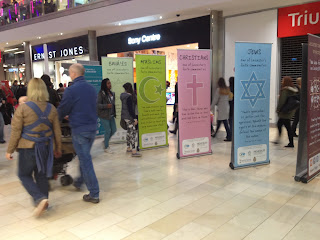 Here's a selection from the dreams, hopes, prayers and wishes left by visitors and volunteers on the branches of our little white tree today:

Peeps have peace all around the world

I wish for a Ferrari

Violence is not the answer!

I pray other faiths can understand each other

May there be peace in the world. May ever you be fulfilled [sic]

Let's have a good Xmas and celebrate as one - LNP

I just want to thank ou the pepol who help us

Posted by George M Ballentyne at 21:00