I'm at Bushloe High School, Wigston Magna, this morning, to meet members of the school's Community Club. I've been invited by Rita Pancholi (Bushloe's Community Cohesion Co-ordinator) to take them for a session on the topic of Diversity.

My son Harry is a Year 7 student at Bushloe. While he's not involved in Community Club, he's the first person I see when I arrive, just after 1030, during morning break. (And a bunch of his friends gather by the fence to wave me off when I'm finished.)

I've brought a variety of pictures on a flash drive that we can look at and discuss. I've picked images which I hope the students will find accessible and relevant, from dance, movies, music, nature, news and current affairs, school, sport, TV drama and so on. Each picture should allow us to talk about different ways the students might have seen diversity in the world around them, or have experienced it in their own lives. Hopefully, we'll all be able to challenge old thinking and move toward new thinking together.

There are 20 students attending Community Club today. They're bright and positive, all of them speak at least once and they make several good contributions. So much so, I only get about two thirds of the way through my presentation. In fact, the students get right into this. 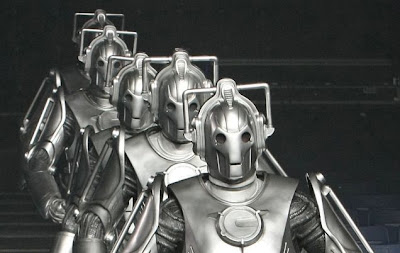 The most spirited part of the conversation is an unexpected discussion of which is a better example of diversity: cybermen or daleks. One of the students makes a convincing argument that it's cybermen (which I wouldn't have picked) on the basis that each one of them has an individual human brain transplanted into their metal skulls. When suppressive measures are switched off, we've seen that a human personality can reappear from that brain. While the daleks might show different colours and have different functions (especially clear in the case of the newest, "Teletubby", models, as shown below), these differences are superficial. Once you get to the creatures inside the Mark IV Travel Machine (as their creator, Davros, originally called them in the 1975 Tom Baker story, Genesis of the Daleks) they're all the same, in their shrill and murderous xenophobia. Nicely put! Well, I'm paraphrasing there of course ... 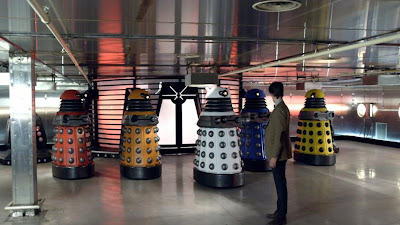 I'll be using similar material for three workshops that Rita has asked me to run at a community cohesion pupil conference at Oadby Racecourse on Friday. Those three sessions are only 25 minutes long, so I'll be deleting a few of the pictures I've used (or intended to use) today.
Posted by George M Ballentyne at 12:47