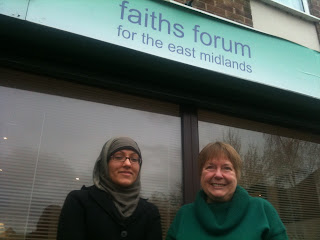 To Loughborough this afternoon, for a meeting with Patricia Stoat, CEO of the Faiths Froum for the East Midlands and Athea Ghosma, FFEM's Development Officer (there they are, shivering outside their office in Moira Street, Loughborough).

Supporters of FFEM were disturbed to learn recently that its funding expires on 31 March - as is the case for every regional faiths forum throughout the country. As I walked to the meeting up from the train station, I tweeted,

FFEM has been in existence hardly more than a couple of years. Indeed, in common with a number of other sorts of organisations (such as REDP) the East Midlands was the last of the nine English regions to get one. In this short time it has already done some good work in creating a sense of collective identity for inter faith organisations across the region. But it was clear to all who took an interest that it had only begun to plant the seeds for more helpful and creative things to come. Now all that potential has been snuffed out. Or has it? Now read on ...

After being ushered into Patricia's office, I feel I have to begin by expressing my sadness, disappointment and anger at the decision about their funding. But as our conversation progresses, it start to dawn on me that perhaps FFEM isn't quite as dead and buried as it might at first seem. The office is closing at the end of February, giving them one month to pay all bills etc. And a very nice office it is too, refurbished and kitted out (modestly but befittingly) to allow them to do their job well. It seemed odd to me that it's slap bang in the middle of a housing estate, next door to a chippie - but that's more so because I'm used to such organisations being sited far from real life locations. So, come 1 April, FFEM won't have premises, paid staff or any funding. But it might not give up the ghost just then.

Although it's all up to the decision of their Board when it meets at the end of this week, there's the possibility of an afterlife for FFEM. Using the social media model, FFEM could continue as a hub of influence, collecting and collating information from the several inter faith bodies in the East Midlands, placing it in a central virtual location. Given my own interest and faith in social media, not to mention my frequent and regular (or, as some might say, "obsessive") practice of it, I can really see the point of this and could see immediately how it would work. Now if we can just get other inter faith folk in Derby, Kettering Lincoln, Northamption, Nottingham, Wellingborough etc blogging, facebooking and tweeting like I do ...
Posted by George M Ballentyne at 18:34