PAVILION OF PEACE AT THE ECOHOUSE 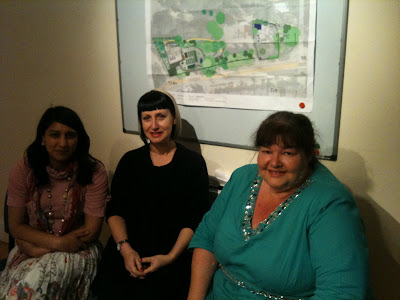 Second meeting of the day at St Philip's in Evington; this timethough, it's in the Centre rather than the Church. This evening’s meeting has been convened by Groundwork Leicester and Leicestershire in the context of their programme for revitalising the EcoHouse.

In an earlier incarnation as Environ, Groundwork Leicester and Leicestershire played a leading role in establishing Leicester as Britain's first Environment City in 1990. The EcoHouse, in Leicester's Western Park, was Britain's first environmental show home. Both supporters and detractors feel that the Eco House has lost its cutting edge in the past few years. Consequently Groundwork is embarking on a major project to refurbish the EcoHouse and its grounds, a project which it is hoped will keep it in the forefront of its field till the year 2050.


With specific reference to the city's faith communities - and to Leicester Council of Faiths - Groundwork is intending to build a Pavilion of Peace within the grounds of the EcoHouse. The Pavilion of Peace will provide a space for prayer, contemplation, meditation and reflection for people of all faiths or of none. It will be set amongst the greenery and abundance of the gardens. The hope is that the Pavilion will provide a focus for sacred ecology. All sacred texts call on us to honour and conserve natural resources, and to reverence God's creation. We all have a duty of care as guardians, toward honouring, protecting and nurturing the great gift of planet earth to humanity.

While this is clearly a worthwhile project that will surely be of interest to all members of Leicester Council of Faiths, Groundwork hasn't chosen the best day or time for this meeting, with little chance of the kind of support they'd hoped for this evening. It's Holy Week, which means many of the Christians who might have been able to attend are occupied; it's Passover, which means most of the local Jewish community are busy; and it's the First Day of Ridván so Bahá'ís are engaged in celebrating the most sacred festival in their calendar and electing their local Spiritual Assembly.

A number of steps are considered and tentatively agreed with the desire of engaging faith and cultural communities in the city and county so that we can make collective progress not only on the Pavilion of Peace but on the more general refurbishment and relaunch of the EcoHouse and its environs.

Three years ago, in the summer of 2008, I took part in an educational project based at the EcoHouse and using the ancient oak tree in Western Park. This was called "Tree of Life" and involved several local schools in day-long sessions of storytelling, handicrafts, honing their thinking and speaking skills, music and movement - and new ways of seeing, thinking about and expressing their relationship to the natural world. It was one of the highlights of my many activities in this post and stands out as a beautiful, enjoyable and fulfilling experience on a number of levels. The sun shone the whole week long and the warmth and light of that week and the relationships that were strengthened then continue to nurture and illuminate my life and work in special ways today. I speak briefly this evening about Tree of Life but it doesn't seem to ring any bells. I'd like to see us be able to make something of the legacy of that project; that would be a fitting way for Leicester Council of Faiths to pitch its contribution to this new ongoing project.

This Pavilion of Peace has the potential to be one of the most significnt and practical contributions to inter faith relations in Leicester for a long time. The fact that it will be a permanent structure, located in an accessible and attractive site, have an educational purpose and be associateed with one of Leicester's most successful and distinctive brands are all very positive aspects indeed. And it seems to me that this would be something highly suitable for us to get behind, in public, during our 25th anniversary year.

In the photo above: Raheema Caratella (Leicester Interfaith Youth Hub), Rosemarie Fitton (MA student in Interreligious Studies at St Philips, who is shadowing me as part of a 30-hour placement with Leicester Council of Faiths), Penny Poyzer (Groundwork Leicester and Leicestershire). They're sitting in front of a display of the proposed work to be done on the EcoHouse and its grounds. Among the group of eight people here this evening, two work with the Black Environment Network (BEN).
Posted by George M Ballentyne at 22:42