SO. FAREWELL THEN, SUGHRA AHMED 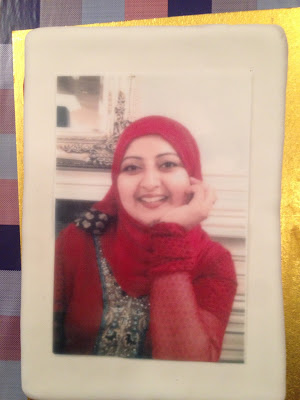 At the Bombay Pavilion, Victoria Park, for a surprise going-away party in honour of Sughra Ahmed. Sughra has been a stalwart of Leicester Council of Faiths all the years I've been in post. She has recently resigned from the Board of Directors as she is leaving Leicester to take up a post with the Woolf Institute, based at Cambridge University. That's her cake in the photo above, with her edible face on it.

Sughra has worked as a Research Fellow in the Islamic Foundation’s Policy Research Centre, based at Markfield Institute of Higher Education. She remains a Trustee of the Interfaith Network UK. She published Seen and Not Heard: Voices of Young British Muslims. She organised flashmob iftar during Ramadan and “Picnic in the Park” thereafter, feeding homeless people and refugees, coordinated through Facebook. She has been of considerable help to me in my post, most notably when she came forward to be one of a panel of speakers at the Amplified Leicester event I hosted at Phoenix Square in March 2011, Amplified Communities of Faith or Belief. I also recall, in particular, how she lit up our display in Highcross on a busy Saturday afternoon during Inter Faith Week 2010, like a flame attracting moths, at ease with the crowds that busy day, able to persuade people to stop and talk or to to take literature as they passed by. She did that gig better than just about anyone else ever involved in it. Not what I expected from someone whom I had thought of up till then as being something of a dry, closeted academic. How wrong could I be about a person, faithful reader? Seeing her in action that one afternoon completely rewrote the script. She also organised a successful seminar for Leicester Council of Faiths during Inter Faith Week 2012, under the title, Faith in Family.

There's a good turnout in her honour this evening and it's clearly been kept secret, to judge by the look on Sughra's face when she arrives. 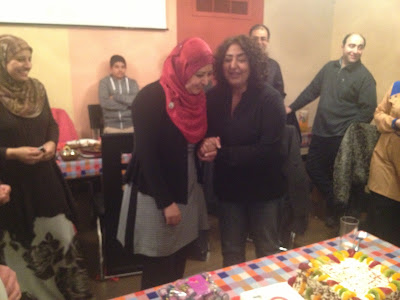 Several friends and colleagues say their bit about how they got to know Sughra, what she means to them and how they're going to miss her. In the photo above, Rupal Rajani (from BBC Radio Leicester) is doing just that.

We all wish Sughra well in her new role and in her future. Personally, I'll miss her calling me "Georgie". I can't imagine anyone else doing that until I'm sitting all day in a high-backed leather chair, wearing a drool bib and being told to eat up while being fed Ready Brek by means of a plastic spoon. I'll be staring into the distance, trying to recall ... someone ... or something ... Anyway: good luck Sughra! Keep in touch.
Posted by George M Ballentyne at 22:00