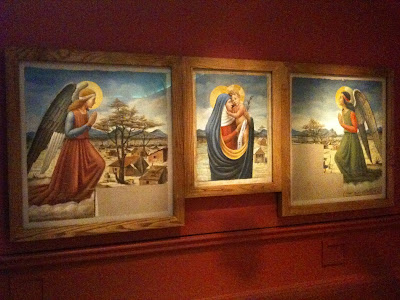 This is a story about three religious paintings that were made by an Italian prisoner of war – Giuseppe Baldan – for a mud chapel. Find out how pictures painted on the back of old flour bags gave prisoners hope during World War II.

The paintings show the Virgin Mary holding her son, the baby Jesus, with angels on either side of them. In the background are views of the Lafaruk prisoner of war camp, where the Italians were held.

The camp was set up near Berbera, in what is now Somalia. The British built it to hold Italian prisoners of war during the war in North Africa.

How did the paintings survive? When the camp was disbanded, Somali soldiers, who were at the camp to keep order, destroyed the chapel and slashed the paintings. The Italian solders rescued the paintings and gave them to Captain Alfred Hawksworth – the British officer in charge of the camp – to look after. In 1965 he tried to give them back. A letter from Luigi de Giovanni, the camp interpreter, explained why the prisoners told Captain Hawksworth to keep them.

“I have appreciated your idea of bringing back to Italy the sacred paintings of captivity we entrusted to you … you must keep them for ever as a gauge of gratitude and love by the 35,000 people who owe you, beyond their life, the dignity of human treatment.”
Posted by George M Ballentyne at 13:38