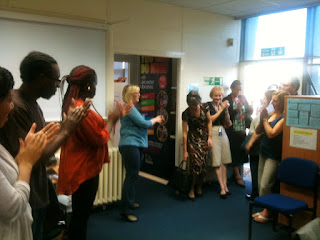 At Forest Lodge Education Resource Centre, Charnor Road, this afternoon, for the launch of the refurbished RED (Religion, Equality, Diversity) Learning Centre. Invitations have gone out to members of SACRE (Standing Advisory Council on Religions Education) and to other organisations that would have an interest in the kinds of resources available here and the system for accessing them (that includes Global Education Leicester-Shire: and thanks to Claire Plumb for the lift!). Our special guest today is the popular and successful author for children and young people, Bali Rai. Some school pupils have come along (as have some mums) just to hear him read.

Leicester City Council is officially represented by Assistant Mayor Vi Dempster, Cabinet Lead for Children and Families. Now, I've long known that Councillor Dempster is Scots (the accent gives it away) but I've never asked where she might be from, originally. So, while I'm pouring her a cup of coffee, she tells me that she was brought up in Clydebank (although she was born in Glasgow, where she spent her earliest years). Clydebank is just over the border from Knightswood on the west side of Glasgow, where I spent my first 23 years. When I tell Councillior Dempster that I did my Highers at Clydebank Technical College, it turns out that she did too! Small world, eh?

I make sure that Leicester Council of Faiths gets its own library card so we can make good use of the RED Learning Centre.

In the photo above: Councillor Vi Dempster cuts the ribbon, officially opening the RED Learning Centre.
Posted by George M Ballentyne at 18:05