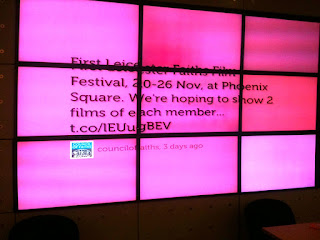 Downstairs in Phoenix Square's cafe bar, after the launch of Listen to the Boys, I sit with Simon Parker and Steve Beverley (cue shameless plug for their radio show, The Jazz Shambles) for a brief and amusing chat about Scandinavian crime fiction. I'm taken by surprise to see the Council of Faiths logo appear on the cafe bar's matrix screen. The logo is attached to our tweet about the upcoming Faiths Film Festival during National Inter Faith Week, which is on display on the screen - there then follows half a dozen or so retweets from different sources (@breadandvirtue; @Clarendon_Park; @IFWeek; @me_positive; @My_MECFSPortal; @sky_like_you; @things2doinleic).

The matrix screen is displaying tweets of all sorts that mention Phoenix Square in an animated, multi-colour dynamic display. Nice idea! Quite a lot of my tweets mention Phoenix Sqaure, as you can imagine, faithful reader. This will only encourage me to do more. 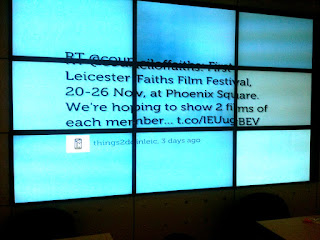 Posted by George M Ballentyne at 19:40