A group of Leicester Baha’is bundle into a minibus this morning, heading for London. We’re on our way to take part in a weekend of rolling celebrations of the centenary of ‘Abdu’l-Bahá 1911 visit to London.

Our first stop is the National Bahá'í Centre in Rutland Gate, Knightsbridge. The centre has recently undergone renovations, entirely funded (like everything else that the Bahá'í community does) by voluntary donations from the members of the Bahá'í community themselves. Small parties of two dozen at a time are being given an hour-long tour of the building  together. We mingle downstairs, have the chance to spend a few minutes in the public reception area (and spend a few quid in the bookshop). Then we're led upstairs to the Parvine Room, which is often used for official reception of visiting dignitaries. There's a brief introduction to the Centre, its history and the story of its various renovations. For those with an interest in the historical development of the UK Bahá'í community, or in historic events associated with faith communities in this country, it was from this site in Rutland Gate that Shoghi Effendi's funeral cortege departed in 1957 and it was where the first meeting of the Universal House of Justice took place in 1963. The image of ‘Abdu’l-Bahá at the top of this blog entry is from a painting, the original of which hangs in the Parvine Room.

Half a dozen or so prayers and readings are distributed - all of them, bar one, are read by Leicester friends. I read the following passage, written by Shoghi Effendi (grandson of ‘Abdu’l-Bahá, Guardian and World Head of the Bahá'í Faith, 1921-57) about the station of ‘Abdu’l-Bahá:

He is, and should for all time be regarded, first and foremost, as the Centre and Pivot of Bahá’u’lláh’s peerless and all-enfolding Covenant, His most exalted handiwork, the stainless Mirror of His light, the perfect Exemplar of His teachings, the unerring Interpreter of His Word, the embodiment of every Bahá’í ideal, the incarnation of every Bahá’í virtue, the Most Mighty Branch sprung from the Ancient Root, the Limb of the Law of God, the Being “round Whom all names revolve,” the Mainspring of the Oneness of Humanity, the Ensign of the Most Great Peace, the Moon of the Central Orb of this most holy Dispensation—styles and titles that are implicit and find their truest, their highest and fairest expression in the magic name ‘Abdu’l-Bahá. He is, above and beyond these appellations, the “Mystery of God”—an expression by which Bahá’u’lláh Himself has chosen to designate Him, and which, while it does not by any means justify us to assign to Him the station of Prophethood, indicates how in the person of ‘Abdu’l-Bahá the incompatible characteristics of a human nature and superhuman knowledge and perfection have been blended and are completely harmonized.

One of the friends read this extract from an article published in a London periodical, in November 1911:

One of the most interesting and significant events which have taken place, has been the visit of ‘Abdu’l-Bahá to London. The Persian Mage whose life, passed in prison, has been spent in promoting peace and unity by the one certain method of aiding individual spiritual development, must in a very real sense have “tasted of the travail of his soul and been satisfied”. Not only was he visited privately by nearly every earnest truth-seeker and leader of high thought in London, but his message was made known to thousands who had but dimly heard his name before.

Another read the following passage, a translation of a discourse given by ‘Abdu’l-Bahá on 13 September 1911 – a hundred years ago, almost to the day:

Thanks be to God, this is a good meeting. It is very enlightened, it is spiritual.

As a Persian Poet has written:—“The Celestial Universe is so formed that the under world reflects the upper world.” That is to say whatever exists in heaven is reflected in this phenomenal world. Now, praise be to God, this meeting of ours is a reflection of the heavenly concourse; it is as though we had taken a mirror and had gazed into it. This reflection from the heavenly concourse we know as love.

Therefore if we say that this meeting is heavenly, it is true. Why? Because we have no other desire except for that which comes from God. We have no other object save the commemoration of God.

Some of the people of the earth desire conquest over others: some of them are longing for rest and ease; others desire a high position; some desire to become famous:—thank God our desire is for spirituality and for union with God.

Now that we are gathered here our wish is to raise the banner of the Unity of God, to spread the Light of God, to make the hearts of the people turn to the Kingdom. Therefore I thank God that He is causing us to do this great work.

I pray for all of you, that you may become celestial warriors, that you may everywhere spread the Unity of God and enlighten the East and West, and that you may give to all hearts the love of God. This is my utmost desire, and I pray to God that your desire may be the same.

I am very happy to be with you all. I am pleased with the English King and Government, and with the people.

You may thank God that in this land you are so free. You do not know what lack of freedom there is in the East. When anyone comes to this country he is content.

I wish God’s protection for you all. Goodbye to you all.


After the prayers and readings in the Parvine Room, we go up to the second-floor room normally used for meetings of the National Spiritual Assembly. Here we see a display of a small number of artefacts associated with the central figures of the Bahá'í Faith and with some of the early British Bahá'ís.


These and other items shown here today are small-scale, personal (even intimate), accessible. At the Bahá'í World Centre in the city of Haifa, the extensive collection of the Bahá'í International Archives Building preserves and displays a massive range of items that illustrate the story of the Bahá'í Faith, the lives of its central figures and the triumphs and tribulations associated with even the humblest adherents of this religion.

I've been in this room many, many times, from way back when I was appointed to the National Teaching Committee at the age of 21, in 1981 till the last time I sat in here in March 2003. What really takes my fancy today is the 32" plasma screen and webcam. This would allow the National Spiritual Assembly to consult with anyone, anywhere in the world with access to a webcam of their own. To me, that's testimony to the up-to-date nature of Bahá'í life, unifying science and religion (which is one of its central principles). 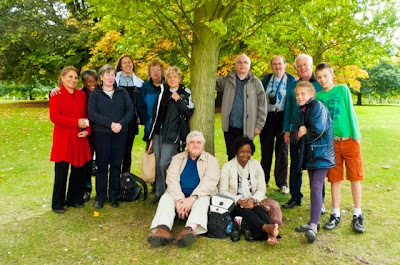 After we leave the National Centre, we make our way over to Hyde Park for a picnic lunch (above). Then we spend the rest of lunchtime searching out Cadogan Gardens, where 'Abdu'l-Bahá spent several days as the guest of Lady Sarah Blomfield during his first visit to London.

We round off our trip with a brief visit to the resting place of Shoghi Effendi in New Southgate Cemetery. 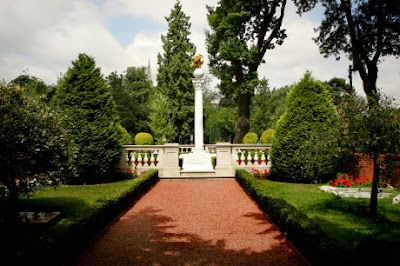 And I'm home in time for Doctor Who. Visit the website of the Bahá'í community of the United Kingdom to find out more about 'Abdu'l-Bahá's first visit to this country.
Posted by George M Ballentyne at 21:44