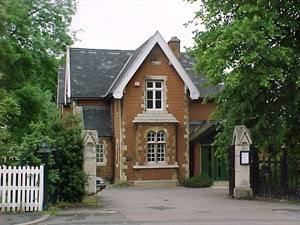 At the University of Leicester's Chaplaincy Centre (The Gatehouse, University Road) where I've been invited to discuss ways of refreshing the relationship between Leicester Council of Faiths and the Chaplaincy's World Faiths Advisory Group.

I share a brief but welcome lunch with Dr Stephen Foster and Dr Ian Snaith: Coordinating Chaplain and Chair of the World Faiths Advisory Group respectively. We talk about the founding, past development and present state of the group and discuss ways in which Leicester Council of Faiths might be able to help it develop its services in future.

The Chaplaincy here is a Christian service, funded almost entirely by the Church of England. The university itself contributes a relatively small amount, funding the part-time post of International Chaplain (a position filled at present by my friend and colleague - and member of Leicester Council of Faiths - Julie-Ann Heath). This natural inclination toward Christianity can bee seen on the Chaplaincy's website, where a link for local places of worship leads to a page where every entry is for one Christian denomination or another.

The Gatehouse itself has only recently begun to be used by groups from outside the university's Christian community. A Buddhist group now meets here regularly. There is a generic "quiet room" on the first floor, into which individuals may bring items they need for prayer or meditation. Muslim students have been given their own facilities to use as a prayer room elsewhere on campus.

The World Faiths Advisory Group works with students and staff, mostly on issues of faith provision on campus. Historically, it has played the role of firefighter - called into action when there's a blaze to attend to, but asked to do little if anything in helping reduce the risk of fire in the first place. Stephen and Ian talk about some of the specific issues that the World Faiths Advisory Group has addressed, such as the clash of lecture times with the times for prayers observed by Muslim students.

The group has recently adopted a new constitution which (it is to be hoped) will allow it to function in ways more relevant to the needs and interests of the university today. It has undergone a process of mainstreaming its presence and services, to align with other relevant functions of the university, such as that of the Pro-Vice Chancellor, who is responsible for equalities across the board.

I brought the Council of Faiths exhibition (all nine pop up banners) to support the Chaplaincy stall at the International Students Fair held at the end of September last year in the O2 Academy (Percy Gee Building). I've been asked to do so again for that occasion this year.

Stephen and Ian would like our assistance in obtaining more consistent representation at meetings from representatives of the city's faith communities. Although some of those representing these communities on the World Faiths Advisory Group are themselves members of Leicester Council of Faiths, there has not been, until now, someone on the group to represent the Council of Faiths itself. It's agreed that I will play that role from now on.

They're also asking St Philip's Centre for Study and Engagement in a Multi-Faith Society to play its part in reinvigorating the World Faiths Advisory Group.

The Chaplaincy will have access to an intern for six months from the start of the new academic year. Among that intern's tasks will be the bringing together of leading figures from the university's different student faith societies to work on matters of common interest.

We tentatively agree on proposing a fortnightly series of presentations hosted by each of the student faith societies in turn, starting early February 2012. This series would take as its theme an issue of interest to all faiths and on which they all have something interesting to say - but something deliberately non-contentious that is unlikely to lead to argument and disputation (e.g. education, family, pilgrimage). If Leicester Council of Faiths can contribute to the success of such activities, then by lending our assistance to the World Faiths Advisory Group we'll be able to demonstrate achievement of some important set us by the City Council, namely:

One hand washes the other.

After the meeting, I cross University Road to the Student Union in the Percy Gee Building and sit on the outdoor terrace at Starbucks there, to do some work on my laptop. It's not the kind of thing I'd usually do, but it's very pleasant there in the warm sun and mild breeze. The lime trees across the road in Welford Road Cemetery are blooming, filling the air with their intoxicating scent - and there are no smokers on the terrace to spoil it. When I was a postgrad student at the University of Leicester about 15 years ago (I took my Masters in "Modern Literature: Theory and Practice") there were precious few amenities or facilities for students. I found the campus quite depressing actually, especially in the winter months. It was dead in the late afternoon and early evenings (particularly noticeable on the course I took, as in the first year, classes finished at 1630 and in the second year at 1800). Cafes and restaurants (or should that be singular) on campus closed around 1630 and there were only two places to go; the library, where there was nothing to do except get your head down and read (or, occasionally, just get your head down) or the bar in the student union. The only hot food available was from a lone burger bar parked up outside the Charles Wilson Building. I wasn't vegetarian then, but still, I never did. The whole place was most unwelcoming. I never felt that I belonged to the university community then and spent as little time on campus as possible. Things here are very different now. The campus at the University of Leicester is a very attractive place. it's a pity that, with the changes in access to Higher Education that have been introduced recently, fewer people of similar background to mine will be able to experience it.
Posted by George M Ballentyne at 16:59