LIGHTS OUT ON THE DARK SIDE 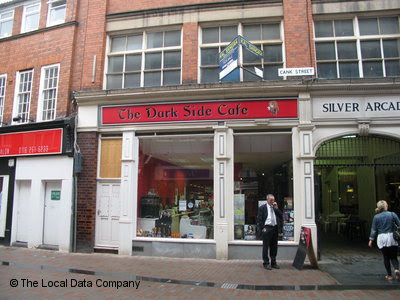 Sorry to see that The Dark Side Cafe close down this weekend. The cafe, in Leicester's Cank Street, had acted as an informal centre for many in the local Pagan community, as well as being a watering hole for a good number of folk who would pride themselves as being of an alternative nature. Meetings such as the local Pagan Moot were held there, as were other gatherings, many of which were open to the public. The basement had potential for use as a performance space, although it was never really put to such use. I gave The Dark Side a big shout out in the blog whenever I could (including local media coverage about its struggle to stay afloat) and I took a group of girls visiting from Blackpool there as part of a tour of Leicester's centres of faith or belief. It's notoriously difficult to run an independent cafe and Leicester city centre is overrun with Costa and Nero and Starbucks as it is, leaving the ten or so independents to square off for a relatively small share of the remaining customers. Although The Dark Side undoubtedly had its loyal fanbase, that wasn't enough to ensure its survival in a very competitive market. 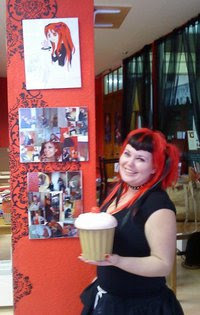 The closure of The Dark Side cafe is a sad loss to the richness and diversity of Leicester. I (and many, many others) wish all the best in future to Lucie Belikova (above), who was the warm, welcoming and charming manager and hostess at The Dark Side.
Posted by George M Ballentyne at 19:58