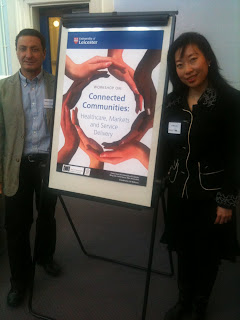 At Leicester Adult Education College today, for “Connected Communities: Healthcare, Markets and Service Delivery”. The workshop is being held in the college's Hansom Hall. This part of the college was recently renamed in honour of Joseph Aloysius Hansom (1803–82), the prolific architect who designed buildings that were to become the city's New Walk Museum & Art Gallery and part of Leicester Adult Education College. He's best known for inventing the Hansom Cab, a ubiquitous feature of 19th Century streets in several countries, which made its first journey on Hinckley's Coventry Road in 1835.

The Coalition Government envisages the future NHS as “the largest social enterprise sector in the world”. Part of this vision involves drawing the non-profit or ‘third sector’ into the welfare mix as a provider of care alongside statutory services. This workshop will clarify the nature and role of current and new relationships that will be needed for the “Big Society” to succeed.

This study is concerned with how diverse groups, communities and organisations hope to work and collaborate in order to play a productive and effective role in the fast-changing healthcare and social policy landscape. The aim of today's workshop is to provide a conducive environment and a safe forum for discussion of issues of common concern and so that further research can be conducted.


The workshop is funded by the Arts and Humanities Research Council (AHRC), in partnership with other leading UK research councils. It is part of a scoping study and review on the theme, Connected Communities”.

The researchers aim to present the views of participants at workshops and other events in an impartial manner to that future research agendas can be established on sound evidence and practice. The research findings will be written up as academic journal papers, a report to the AHRC and will be presented at seminars and conferences.

We’ve been told beforehand that the research project has the following aims:
And that our participation will bring the following benefits to our communities of interest:
I get to display the Council of Faiths pop-up banner at the back of the hall. I was hoping that more of the community-based organisations represented today would want to display themselves in this way, but we’re the only one. We'd like to think that the Council of Faiths would be high up on the team sheet when this kind of event is being organised or this kind of project is being planned. We hope it could be said that the faith communities of Leicester are able to demonstrate a special kind of connectedness that can inform – and be informed by – such an event and project. On the other hand, when we put our minds to it we can also show a kind of disconnectedness – from each other and from society at large – that would probably beat virtually all others hands down!

Attendees are distributed around five tables, six people of mixed background, experience and interest round each one. I’m seated with Chino Cabon from The Race Equality Centre (TREC), Dee Martin from Leicestershire Centre for Integrated Living (LCIL) both of whom I work with on a regular basis in the Regional Equlity and Diversity Partnership (REDP) and Parmjit Basra from Leicester Adult Skills and Learning Service (LASALS) with whom I've worked most notably on Leicester Speaks. Some of us wonder if we’ve been corralled, so that we’re not able to mix our opinions in with others whom we don’t work with on a regular basis – a cynical notion that doesn’t stand up to scrutiny, I hope! The facilitator on our table is Prof. Carlo Ruzza, Co-investigator, AHRC Funding Award on "Connected Communities" at the University of Leicester’s Department of Sociology.

The session is opened by Dr Ming Lim, Lead Investigator, AHRC Funding Award on "Connected Communities" at the University of Leicester’s School of Management. She directs us to two icebreaker questions for each table. Firstly: “If you were to describe the NHS as an animal, which animal would you choose and why?” Here are some of the answers that we came up with around our table:

And secondly: “If the NHS’s service delivery was a form of transport, which one would it be and why?” Here are some of the answers that were offered around the tables:


After the icebreakers, we’re invited to take part in group discussions to help further this study. Each table is asked to consider three questions:


Question 1 In 2010, the government released a White paper on proposed reform to the NHS. One of its key proposals is that, for patients thee should be “no decision about me without me.” What is the significance of this focus on patient and user engagement for your organisation?


Question 2 How do you think you can improve relations with your users and the community you serve in this time of change in the NHS?


Question 3 How have financial pressures over the last couple of years affected your organisation and your level of service delivery?


I’m just putting the questions themselves in this blog entry, rather than picking and choosing from the wide range of responses. Perhaps you may be able to think of what some of the responses might have been, faithful reader – and to come up with a few of your own.

During the lunch break, members of the research team take the notes from the five tables off into another room, identify some headline themes, topics and comments from them and compile them into some slides that Dr Lim presents to us all after lunch. There’s speed and efficiency for you! So the afternoon session comprises Dr Lim debriefing us all from slides, followed by a “roving mic”session, in which attendees respond to the content of these slides and whether they represent fairly the things we discussed earlier in the day.

After the formal end of the workshop, several attendees stay behind to be interviewed for the study individually or in small groups (anonymously).

This would appear to be an interesting, timely useful project. I hope that Leicester Council of Faiths has the opportunity to be involved in the long term and to contribute positively to its progress and outcomes.

In the photo above: Prof. Carlo Ruzza (left) and Dr Ming Lim (right).
Posted by George M Ballentyne at 19:00