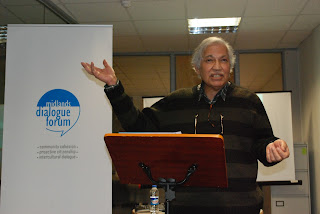 To Mansion House, Guildhall Lane, for a talk sponsored by the Midlands Dialogue Forum: "Rising as a Civilization: Which Muslim Countries can Accept the Challenge?" by Dr Asaf Hussain of the Universityof Leicester and Chair of the Society for Intercultural Understanding in Leicester.

The talk is well supported, with about 50 or so attendees (among them my son Alastair, Alan Race and John Hall from St Philip's Centre for Study and Engagement in a Multi Faith Society, Allan Hayes from Leicester Secular Society and Rachel Carmichael from Leicester City of Sanctuary).

I've had the pleasure of reading quite a bit of Dr Hussain's writing recently and of collaborating with him on a few occasions. His knowledge, erudition and insight are matched by his affability enthusiasm and humour.

Ten minutes or so into the talk, the room is suddenly filled with the sound of Morecambe and Wise singing "Bring Me Sunshine". I look around (as do several others) wondering whose phone that is and why they're not doing anything about it. Then I realise it's coming from my iPhone, in my pocket. but it's not my ringtone, so I don't know what's going on. I move to the back of the room, get it out and see that it's a YouTube video, which appears to have burst into life of its own accord. Ruddy iPhone!

Mansion House is the new premises of the Midlands Academy of Business and Technology (MABT). They also have a site in the Melbourne Centre, Highfields. I was occasionally involved with them there, when I did some work representing the British Accreditation Council, the agency which authenticates private institutions of further education in this country. I visited MABT a number of times, got to know some of the staff and its owner and CEO, Rokonuddin Ahmed, who is here at this meeting. I'm gald to be able to renew my acquaintance with him this evening.

Making my way back home tonight, at the end of a rather long day, there's an odd sense of experiencing the day in reverse. The frost I saw disappearing as I left the house this morning is forming again on the roofs of cars and I'm listening to another edition of Astronomy Cast (this time, "Where Do Baby Stars Come From?")