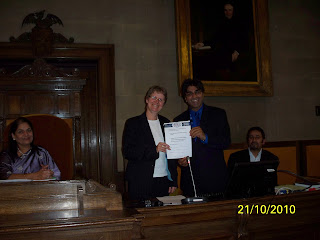 Our Annual General Meeting this evening in the Council Chamber, Town Hall. I'm in here an hour beforehand, to set up our exhibition banners. Although we've had this for almost a year now, this evening will be the first time that many members of the Council of Faiths will have seen it up close.

The theme of our guest speakers this evening is "Faith Communities and Health". First up is Maqsood Ahmed, Director of Inclusion, East Midlands Strategic Health Authority. Maqsood began his presentation by reflecting on his experience of equality and inequality in his personal and professional life. He shared the benefits of his current experience of working with the NHS in the East Midlands. He commented on the central role of religion or belief in recent legislation establishing equality and the role of faith communities in relation to "Big Society". He identified as a major challenge for the NS the need to  engage the Voluntary and Community Sector on behalf of patients, partly with the purpose of holding the NHS to account. He said that Leicester is ahead of the game in terms of community engagement and can export good practice to other parts of the East Midlands (and further afield) as exemplified in the policies and practices of our Council of Faiths. He expressed concern about future development of the NHS in general and, in particular, the necessity of assuring diversity of representation on commissioning boards. He raised the topic of relations between faith communities and the forthcoming GP consortia and bodies like Healthwatch. He described how equality and diversity is not an issue about minorities, but about the majority of the community, no matter their race, religion or other characteristics.

I'm sure that each time Maqsood mentioned the Equality Act he prefaced it with the word "ghastly". This is the second time I've heard him address a meeting and I thought he did this last time too. I intended to ask him if I were hearing him correctly and what he meant by that, but he left before I was able to do so.

Deb Watson, NHS Leicesrter City Director of Public Health and Health Improvement, officially launched the "Faith Communities Health Champions" initiative, on which I've been doing some work since she and her deputy, Rod Moore spoke to a full meeting of the Council of Faiths earlier this year.

Deb (centre left) and Maqsood (centre right) are holding the form on which attendees were invited to come forward to be involved in the "Faith Communities Health Champions" initiative. To the left is Councillor Manjula Sood (Chair of Leicester Council of Faiths), to the right, Fayyaz Suleman (Secretary).
Posted by George M Ballentyne at 22:58