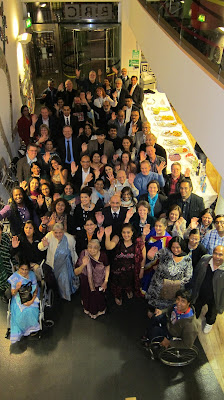 I've accepted an invitation to attend a reception at BBC Radio Leicester this evening, to celebrate the conclusion of their Uganda 40 season, that has been running for the past couple of months. 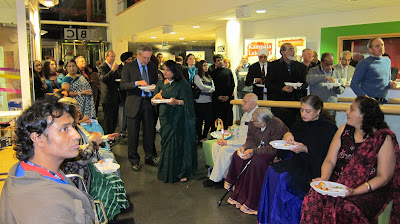 There are about 60 guests gathered in the foyer. I've not seen this used for such a purpose before, but its a very good setting for this kind of thing. For part of the reception, Kamlesh Purohit is broadcasting live from the foyer, interviewing some of the attendees. After all, this is taking place during his time slot. 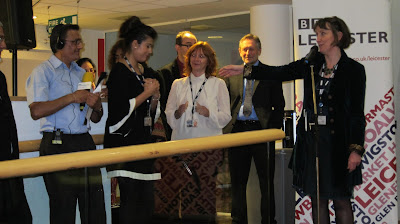 Speakers include Jane Hill (Editor of BBC Radio Leicester), Rupal Rajani (BBC Radio Leicester presenter, who travelled to Uganda to record several programmes broadcast during this celebratory season) and Sir Peter Soulsby (City Mayor). Sir Peter offers a brief overview of the ways in which the arrival and settlement of Ugandan Asians has transformed the nature of Leicester in business, civic, commercial, culinary, cultural, demographic, economic, political, religious and social terms over the past four decades. 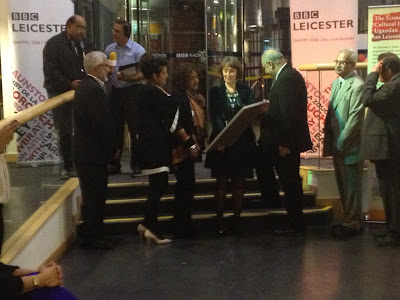 In the photo above, Jane Hill presents Rupal and her producer, Namrata Varia, with a gift expressing the station's thanks for the work they put into making the Uganda 40 season such a success. 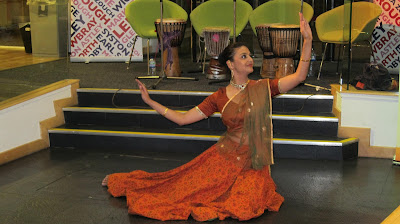 As part of the entertainment this evening, Rishi Tavare plays tabla and there's a performance by Kesha Raithatha (photo above), from Leicester's Centre for Indian Classical Dance. There's an exhibition about the Centre on the first floor here, which I get an opportunity to look at (photo below). 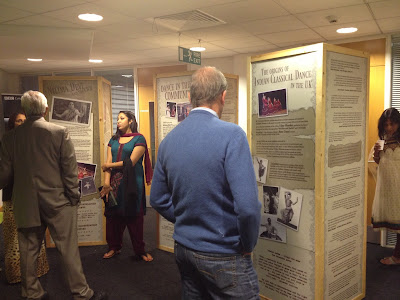 It is announced this evening, to general acclaim, that the exhibition, "From Kampala to Leicester" which ran for three months at New Walk Museum and Art Gallery will be given a permanent home at Newarke Houses Museum. I've blogged a couple of times about that, particularly the closing reception (24 September) and about a lecture I heard there entitled, Ugandan Asians in Leicester: From Refugees to Citizens (7 August). I also took part in a live phone-in radio show, last in a week-long series with Jim Davis, entitled "Immigration and Integration: What is the Future for Leicester?"

This is a very congenial occasion which says good things about our city. I'm privileged to have been invited and glad to have attended.

Of the six photos included here, the first, second and fourth are courtesy of Dimple Patel, producer at BBC Radio Leicster. There's also a nice gallery of photos from this evening's event on the website of Pukaar News.
Posted by George M Ballentyne at 22:30