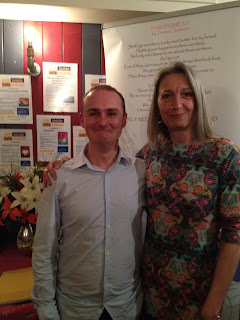 This evening I'm at The Cookie Jar (downstairs at The Crumblin' Cookie on Leicester's High Street) for the launch of Rethink Your Mind.

Rethink Your Mind is an innovative new mental health project from Safe Inside Safe Outside (SISO), a well-being organisation run by service users for service users, supported by Advance Housing and Leicestershire Partnership NHS Trust. SISO encourages and empowers service users to engage in creative outlets (e.g. music, writing) as part of the process of dealing with their conditions.

I found out about this project through Pete Hirst (who is a member of the board of SISO). Pete has gained a strong positive reputation with his band Refuge. I first met him when I taught Creative Writing for ReMit (Leicester City Council's education provision for adults with long-term mental health issues) at the Watershed Youth Centre. Pete was in my Tuesday afternoon group there. That’s Pete in the photo above (all smiles, on the left) with Lyndsey Shaw, Manager of SISO.

Rethink Your Mind will feature a competition, starting October 2012, based around the positive brief, "With good mental health I have ...”. SISO ran a similar competition last year, the entries of which were quite dark. They’re going for a different outcome this year, hoping to create a new public profile for mental health.

Cllr Manjula Sood, Assistant Mayor, who holds the Cabinet brief for Health and Adult Social Care (and, of course, Chair of Leicester Council of Faiths), speaks in support of SISO, of this project and of Pete in particular.

Lord Kamlesh Patel, Patron of SISO, will host an award presentation for the completion in the House of Lords next year.

When event kicks off, there are two dozen people in the room. By the time I leave, some two hours later, that’s grown to at least three dozen. And the evening wasn’t over yet as Refuge were yet to take the stage for a live set.
Posted by George M Ballentyne at 22:00