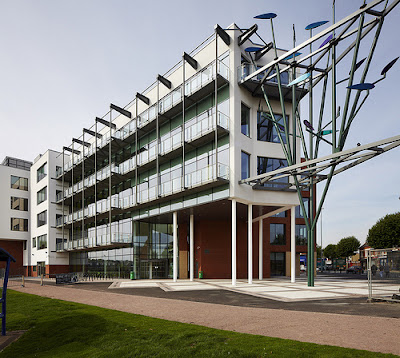 At South Leicestershire College (South Wigston Campus), this afternoon for the East Midlands Regional Forum of the National Council of Faiths and Beliefs in Further Education. There are 14 attendees at this relatively short meeting, representing a range of institutions and services:

I've been invited to attend this meeting by Kevin Commons and Ian Grayling of the Leicester Serene Reflection Meditation Group, who have organised the spring term courses for Christians Aware's Faith Awareness Programme, which have been a staple of this blog over the years (see blog entries passim). Kevin and Ian are, respectively, giving two of the three presentations in this afternoon's programme:

Today's meeting is held in the college's Multi-Faith Centre. The Centre serves as the home of South Wigston United Reform Church - part of the South Leicestershire Group of the URC, formed in 1986. The group consists of six churches - three former Congregational and three former Churches of Christ -  working together, sharing resources and ministry, although each of the six churches retains its individual identity.

Relocation of South Leicestershire College required the demolition of older properties on the site of what would become the new campus. The congregation of the United Reform Church (originally founded on this site in 1886) accepted the challenges and the opportunities offered by moving into the college and sharing the Multi-Faith Centre with students and staff and worshippers from other background, faiths and traditions. It is now known as the Church in the College (or, as Rev. Richard Eastman put it today, "The Church in the Cupboard"). 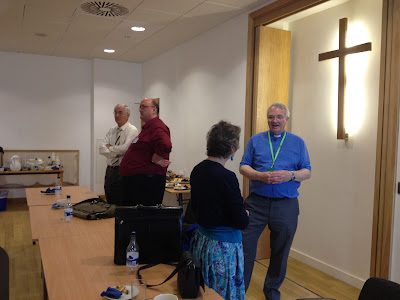 This is the first time I've been in the new premises of South Leicestershire College. The college (and its predecessor, Wigston College) used to be located across the road from where I lived further up the hill on Station Road. That campus was sold and the site razed to the ground a couple of years ago. The site stands empty today, despite having been announced at one time that it was to be a site for multi-bedroom executive homes, at another for a new health centre. I took my Professional Certificate in Education there back in 2005. Ian Grayling was my mentor on that course.
Posted by George M Ballentyne at 17:00