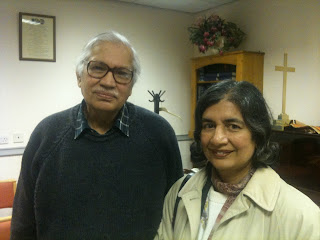 At Christchurch, Clarendon Park Road this evening for the ninth session of Mindfulness and Morality, a twelve-week course offered by Christians Aware as part of their Faith Awareness programme.

This time a Muslim perspective is presented by Dr Asaf Hussain, Chair of the Society for Intercultural Understanding in Leicester (in the photo above with his wife, Freda, a founding member of Women for Interfaith Understanding and former Head Teacher at Moat Community College).

He speaks about how Islam is both a religion and a civilization. Taking a societal approach, rather than the individual, Asaf shows us a process that doesn't focus on the well-known Five Pillars of Islam. He describes how faith (iman) leads to action (amal), the principal action being the establishment of community (ummah) which is built on the twin foundations of justice (adl) and knowledge (ilm). Moral standards and ethics emerge, Muslims work out how they should live together, as do individual values. Asaf discusses how these ethics have operated in commerce, politics and warfare. His thesis is that today's apparently all-consuming moral dilemmas for Muslims arise from the fact that they are alienated from Islam. Such  alienation takes two forms: estrangement and powerlessness, which characterise Islam until the worldwide Muslim community can reconnect with the source of their faith and the wellspring of their civilization. That would be the "mindfulness" dimension of this session, then.

There are 13 here tonight (including Asaf). We split into three groups of four for discussion, which takes a form different to the way we've done it in previous sessions. Asaf hasn't given us a dilemma, as our previous facilitators have done, so what we do is devise our own dilemmas based on what we've heard this evening. We come up with the questions this time rather than answers. three such dilemmas, originated by the groups are shown below:

Fatima is Head Teacher at a secondary school in England that has a large number of Muslim students on the roll. One day two parents bring their daughter, who is wearing the full veil, to an interview with a view to enrolling her in the school.  Fatima suspects that the “girl” is actually an adult and beyond the age range of the school. She wants to check this out by seeing the prospective student’s face but asking the girl to show herself could be seen as being disrespectful. What should Fatima do? Would it make a difference if the Head Teacher were male? Would it make a difference if she were not a Muslim herself?
Dr Hart is a practising Christian who went to live in a Muslim country to work as a general medical practitioner for the local community. This was working well until a local political change brought in a Muslim fundamentalist who told the doctor to convert to Islam or leave the area. If he continues to work as a doctor and a Christian his life may be in danger! What should he do?
Ali is a prolific writer on Islam, who focuses on teachings in the Koran that stress how religious faith should be accompanied by good actions aimed at building up harmony, not only between Muslims of different schools but also between Muslims and people of other faiths. He is nearing completion of his latest book challenging Islamic fundamentalist practices. He receives a letter telling him not to publish this new work or he will be killed. What should he do?

Posted by George M Ballentyne at 22:48