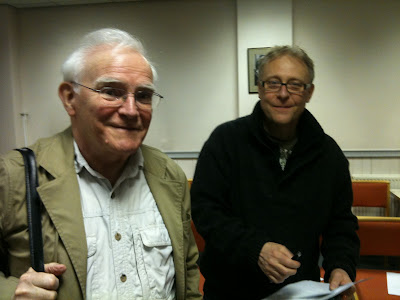 Session seven of the Mindfulness and Morality course at Christchurch, Clarendon Park Road, offered by Christians Aware in their Faith Awareness programme.

This evening, Dr Allan Hayes presents a Humanist perspective. Allan (on the left of the photo above, with Ian Grayling) is Humanist Chaplain to the Lord Mayor of Leicester, a Trustee of the British Humanist Assocation and immediate past President of Leicester Secular Society.

Allan defines "Atheist", "Agnostic" and "Secularist" for the beneift of those of us who can't tell the difference. Allan tells us that he prefers to define himself as a Humanist. He shows us some texts that have been influential in helping him form his opinions over the years, starting with a book he says he first read in 1957 (when he was in the third year of his PhD - and three years before I was born). The Family of Man is a collection of photographs of anthropological interest, published by the Museum of Modern Art (MOMA), New York to commemorate an exhibition there in 1955 (and it's still in print). He has also brought along DVD boxed sets of Jacob Bronowski's The Ascent of Man and Carl Sagan's Cosmos for the same reason.

Allan outlines how a Humanist would approach the topic of morality in general and highlights basic differences between that position and those of some of the religious people who have spoken in earlier sessions. While he is happy to admit that we'll all have learned a lot from previous speakers, it can't justify religion(s) being afforded the privileges of organs of state. Allan sides with the Scots philosopher David Hume (1711-76) in seeing that emotions tend to lead the intellect, rather than the other way round. Therefore, we need to understand the emotional foundations of people's behaviour; although the intellect is used to hone one's position or define a public stance on issues. Feelings are supported and refined by intellectual analysis.

Humanism is the opposite of a materialist, intellectualised view of life which disregards what some would describe as the "spiritual" dimension of life. But since Humanists don't believe in an afterlife, all good must be done in this life. Our commitment has to be to this life: there is no other and there is no other chance. Advances in science and technology have made life at one and the same time simpler and more complex. There remain the mysteries of consciousness and (of particular relevance to our discussion this evening) of free will. If we can't use our imagination, understanding will power and intelligence to deal with the bigger problems we all face then we will not continue to be here. Building humanity is the heart of the issue.

Here are a number of principles that we may assume when encountering Humanism and Humanists:

For the final half hour or so of this session, we occupy ourselves with the moral dilemma Allan gives us, which is described below:

In the coming Census the following question will be asked:


What is your religion? (This question is voluntary)
What should each of them do?


Here are some of the comments from the groups in which we discussed this dilemma:

Completion of this question is a small act and most respondents won't think twice about it. then again, that's where the "mindfulness" in which we're interested is to be found.

Most people won't think about how information gathered in the Census is used and will do it as a civic duty (one fo the few that is incumbent upon us). Even the fact that it's a voluntary question may not register with many respondents.

Question of abiding by the law versus the privacy of the individual. Can one be a conscientious objector to the Census?

Concern was raised over the fact that the contract for collecting the Census information has been given to the US firm, Lockheed. It was felt that this might well be a source of anxiety to Muslims.

People feel unhappy about a question like this, with personal implications, so perhaps there could be part of the Census questionnaire that could be detached and separated. This would allow other sensitive questions (e.g. about sexual orientation) to be asked.
Posted by George M Ballentyne at 23:56