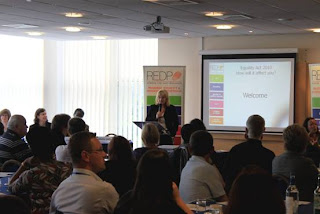 REDP's event at Walkers Stadium. Great attendance, good contributions, positive and supportive atmosphere. For the first time in REDP's public events this year, I take a back seat. I facilitate on tables in the two afternoon workshops, but otherwise get a fairly quiet time of it today - which means that I get lunch this time, unlike the last day REDP hosted at this venue!

My particular function today, though, is to keep feeding REDP's twitterstream throughout the event. Our twitter name, for those who would like to follow us, is @REDPartnership.

Here's how we've described the event, for publication in the local media:

The Act, which became law just before Parliament was dissolved for the General Election, protects people from discrimination on grounds of age, disability, gender and gender identity, race, religion or belief, and sexual orientation.

Around a hundred people attended the conference, drawn mostly from the Voluntary and Community Sector and the Public Sector from right across the East Midlands.

The event was hosted by the Regional Equality and Diversity Partnership, which works across the East Midlands to strengthen the voice of the Voluntary Sector on these important issues. REDP has grown out of a successful collaboration of a number of Leicester-based organisations that have worked together in a variety of combinations over the past decade.

Sheila Lock, Chief Executive of Leicester City Council, officially opened the day, welcoming delegates to the event and to the city. She said that it was right for the conference to be happening in Leicester as the city is widely celebrated for its diversity and has a history of speaking up for equality. Sheila further said, “The Third Sector has been instrumental in bringing about improvements in equalities. … colleagues [in the public sector] have much to learn from the experiences of colleagues in the voluntary sector when it comes to challenging established systems and practices. I welcome that challenge, it is what helps people improve.”

A trio of nationally prominent speakers addressed the morning session , each one speaking about one important aspect of the new Act: Alison Pritchard (Head of Strategy at the Government Equalities Office), Amanda Ariss (Chief Executive at the Equality and Diversity Forum) and Anthony Robinson (Director of Casework and Litigation at the Equality and Human Rights Commission). The speakers also took part in panel discussions; workshop sessions in the afternoon helped attendees focus on major issues that affect them now and that will arise in the future.

Iris Lightfoote, Chair of the Regional Equality and Diversity Partnership, said, “The number of people that felt this event was important enough to attend demonstrates the continuing significance of work to bring about equality of outcomes across the East Midlands. The profile of the contributors demonstrated the support that REDP is able to bring to this work and, hosting it in Leicester shows how much the voluntary sector’s contribution to this work should be valued.”

Sad to report though that the Leicester Mercury didn't publish anything about this event.

Find out more about the Equality Act 2010:
http://www.equalities.gov.uk/equality_act_2010.aspx

Find out more about the Equality & Diversity Forum:
http://www.edf.org.uk/

Find out more about the Equality and Human Rights Commission:
http://www.equalityhumanrights.com/

Find out more about the Government Equalities Office:
http://www.equalities.gov.uk/