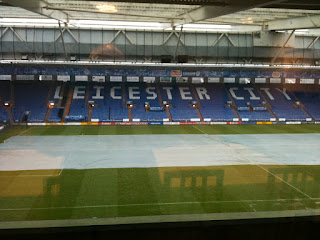 To Walkers Stadium this afternoon, for a meeting called by the Leicester Strategic Partnership for those doing the work in their Host Organisations. This meeting follows on from an all-day event, the latest in the "Making It Real" series of events - this one on the theme of "Stronger Neighbourhoods". We only received a week's notice of this and the other Host Organisations may not be able to send someone in support, but I thought it a good idea to go, so I've confirmed that I'll be there. This despite the fact that I'm labouring with a heavy cold and it's raining.

The woman on reception has this event on her schedule as the "Post 3:30 Meeting" and she directs me to Box 15, on the third floor. I sit in Box 15 (which has a very nice view of the pitch, as you can see, above) for about 20 minutes, wondering when anyone else is going to show. Sitting in this empty room, gazing out on the deserted stadium, pitch partly covered, goalposts taken down ... it begins to feel like a meditation on nothing much at all. After a while, I start to wonder if I'm in the right place. I make my way back down to the Grand Hall, where the "Making It Real" event would have been held. Perhaps it's overrun. I'll probably meet some people making their way up to the third floor for my meeting. These corriders are longer and quieter than I would have first thought - and because the lights switch on automatically by sensor as you pass under them, it's all a bit darker too. When I do find the Grand Hall, it's empty, with only a few staffers in the early stages of cleaning up. I ask one young woman picking up empty cups and saucers if she knows whether anyone was making their way up for the "Post 3:30 Meeting"; but she tells me she heard them making the decision to cancel that meeting earlier in the day.

On the way home through the rain, I phone Dee at LCIL. She reminds me that we'd made a decision that since we couldn't all go, then none of us would go. I remember discussing this at our meeting on Tuesday, but don't remember actually deciding anything about it. But it makes sense, and it's our mutually supportive way. But if that's so, how come the woman doing the cleaning up heard them decide to cancel the meeting this morning? And why was it still on the schedule at reception? My head is too full of cold and I've had way too much Lemsip to figure this one out - obviously.

Find out more about the Walkers Stadium:
http://www.thewalkersstadium.co.uk/
Posted by George M Ballentyne at 21:33