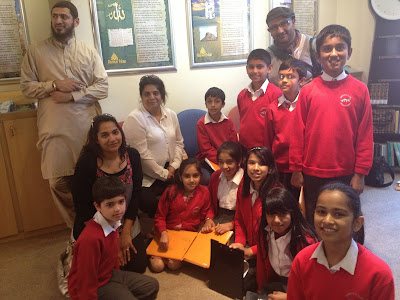 This afternoon I'm at the Islam Information Centre, Highfield Street, helping out with a visit of Year 5 pupils from Sandfield Close Primary.

This is the last of four visits in two days to local places of worship, arranged in association with The Mighty Creatives (a charity based in Leicester's LCB Depot, working across the East Midlands to champion young people's creativity and innovation). 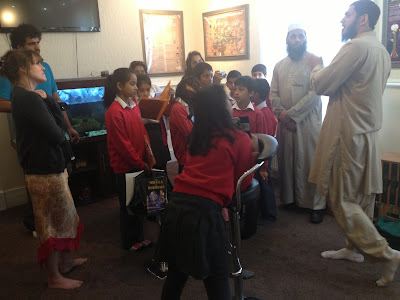 The group is kitted out with cameras of different kinds (for stills and video), digital voice recorders and good old fashioned paper, pens, pencils and crayons. Artwork that the children produce as an outcome of their visits will be on display under the title, "Faith in Neighbours" in the Mezzanine at Curve as part of An Indian Summer later this month.

Each of the three floors in the Centre has themed rooms. The ground floor and reception area is "Discover Islam". On the first floor are two rooms, "Status of Women" and "Islamic World of Science". In Science room, we watch a short multi-award winning DVD feature, Library of Secrets, starring Sir Ben Kingsley, which reveals some of the contributions that Islam has made to essential aspects of our modern world. This is very well made, à la Harry Potter: accessible, enjoyable and interesting for children and adults alike.


Our guides today are Kamran Qayyum and Abu Bakar. In the photo below, they're standing with a display of copies of the Qur’án in different languages. To the left of the picture are translations of the Qur’án in Albanian, Chinese, French and German; to the right, Korean, Portuguese, Spanish, Tamil and Urdu translations. I took this photo last week, when visiting with the chldren from Sandfield Close Primary, but it's such a good one that I make no apology for using it again. This is taken in "The Noble Qur’án" room, one of the two themed rooms on the top floor. The other is dedicated to a display on "The Prophets of God (Peace Be Upon Them)".

I've met Abu and Kamran separately before but this is the first time I've seen them work together. I have to say that they make an effective double act. They have a great rapport with the children and generate a good deal of fun and laughter during their presentation. The kids clearly enjoy their short visit here and it's hard to get them back on the coach when it's time to leave.
This morning we were at the BAPS Shri Swaminarayan Mandir, Gipsy Lane. Yesterday morning we were at the Jain Centre, Oxford Street; yesterday afternoon, Leicester Cathedral. It's been great working with these ten children, whose energy, engagement and enthusiasm has remained at the same high level from first to last. It's also been a pleasure to spend time with Asha Sodha and Raksha Patel, who have accompanied the children. Raksha is a PTA member and volunteer on school activities. Asha is a Teaching Assistant and Secretary of the PTA. She also works as part of Nupur Arts Dance Academy, which took part in the recent Spark Festival and will be involved in An Indian Summer at the end of the month. I've also been glad of the chance to work alongside "G" too. It's hard to pull of that look of wearing a bunnet indoors, but he manages it with style. 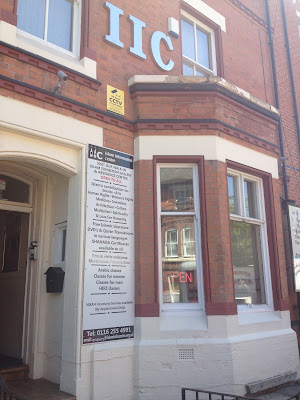 I'll be coming back to the Islam Information Centre on Monday evening (10 June) with a group of adult visitors for one of Christians Aware's Faith Awareness summer visits. I'm looking forward to that already!
Posted by George M Ballentyne at 15:00