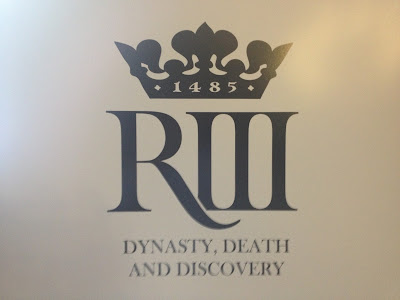 At Leicester's medieval Guildhall this afternoon (the hottest day of the year so far) for a briefing for "key individuals and organisations" regarding the latest developments on the King Richard III Visitor Centre and its relation to Leicester's bid to become UK City of Culture 2017.

City Mayor Sir Peter Soulsby leads both parts of the meeting, with contributions from many of the attendees, representing interested parties from city and county.
Early in the meeting we break into small groups for a quick bit of workshopping, in which we consider three questions:


It's revealed for the first time today that the major themes around which the Richard II visitor experience will be structured are:


Since final planning approval is still pending for the Visitor Centre and eveyone is avoiding the temptation to count their chickens before they've hatched, the presentation today is more concept than content. But even that offers an inspiring glimpse of the benefits to come. 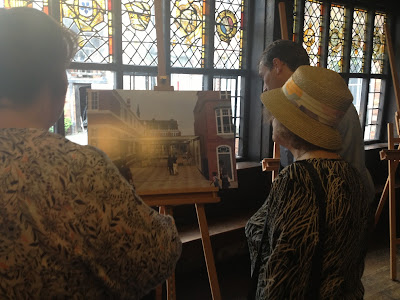 There's an exhibition of artist's impressions of the Visitor Centre that we can peruse at our leisure before and after the formal presentations. A few of us sneak into the temporary Richard III exhibition in the Cathedral Visitor Centre attached to the Guildhall. This exhibition welcomed its 100,000th visitor this week.

I'm glad to see Smita Shah here. Smita represents the Jain Centre on Leicester Council of Faiths, Since the Jain Centre is just a stone's throw from the site of the Visitor Centre, she publicly acknowledges that they expect a positive impact on the number and range of visitors they'll expect to receive once the Visitor Centre opens. I hope that the example of the Jain Centre will help other faith communities and organisations in the city feel involved in what has already become a great boon to Leicester - one which can only increase in years to come.
Posted by George M Ballentyne at 20:00