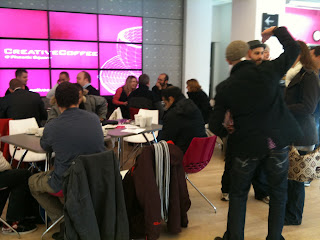 After participating in the taining event for LASALS staff at the Adult Education College, I get to CreativeCoffee Club (at Phoenix Square Film and Digital Media Centre) a bit late this morning, with only half an hour to go. It's always worthwhile no matter what time you turn up and it's good to refresh my networking chops.

I persuade a few of those attending to step in front of my Flip video camera, to speak for a minute or so about CreativeCoffee Club: Jane (who co-ordinates it), Farhanah (a veteran of sorts - though not when compared to me, of course) and Tara, Charlie and Magda (speaking as newcomers). I do a few more shots, but background noise makes them unsuitable for uploading to our YouTube channel.

Magda, whom I've only met once before, said the nicest thing to me. She's from Poland and she'd been trying to tell her friends and relatives back home what Christmas is like in Leicester. Rather than describe it, she has been directing them to the two videos I shot just the other night of the Christmas decorations in Town Hall Square and posted on YouTube :^)
Posted by George M Ballentyne at 15:29