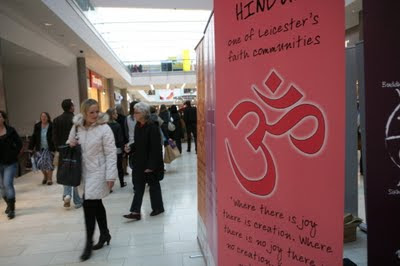 Here’s how the arrangements work for those volunteering to help out on the display at Highcross. No more than three people on duty at any time, in two hour shifts. Anyone can do more than one shift, some people do a few on the trot. Across the whole week, that’s 99 individual slots. By the time the exhibition started on Sunday, all but one of those slots was filled, by 56 different people. A small number have had to pull out because of illness or because of unexpected work, study or family commitments; a smaller number just haven’t turned up. I’ve tried to ask people whom I know and trust to do the job right, but I’ve had to take a few people on others' recommendation. On the whole it’s all worked out fine. There’s been no time where everyone on the exhibition has come from just one faith community. The way we’ve arranged the rota has itself gone some way to meeting one of the goals of National Inter Faith Week: to increase understanding between people of religious and non-religious belief. We’ve provided some guidelines for how volunteers should conduct themselves on the stall, but for the most part, folk can be left alone to get on with the work.

This morning is a nice example of that mix, in a more visible form than usual, with an Anglican priest and two Buddhists taking a turn on the display.

Today’s “First Person” column in the Leicester Mercury is by Allan Hayes, President of Leicester Secular Society. He's written a very strong and positive piece that fits in with the tone of National Inter Faith Week without compromising his or the society's humanist principles.

I never look at the "Thoughts for the Day" in the Mercury; I've never been a fan of that sort of roadside pulpit approach. I should though, from a professional point of view. So I read today's. There's always two pieces: one from the Old or New Testament and another from one of the other religions in the city. Today's "other" is a lovely quote from Paris Talks by 'Abdu'l-Bahá: "It is my fervent prayer that the star of the East will shed its brilliant rays on the Western world, and that the people of the West may arise in strength, earnestness and courage, to help their brethren in the East."

Here are some of the comments written in the reflective journal by volunteers on the exhibition today:

“It was a valuable way to spend a morning with faith colleagues, witnessing to our unity in the midst of this temple of consumerism and materialism. Well worth doing and I hope it touches many people.”

“Thank you very much for organising this event. I liked very much the presentation. I have been here in quiet time, but still feel the importance of it. It would be great when the panels will go to other places, schools … Thank you.”

“Thoroughly enjoyed being part of this event. I hope there will be many more to come. Received great interest and many people were friendly.”

“Thanks for the opportunity to present unity in diversity. Although few people stopped to talk for long, many passers-by did read the quotes on the faith banners and many others will have subliminally registered the stand and its message. I’m sure events like this help to sustain Leicester’s reputation as a peaceful, cohesive and diverse city.”

“I’ve really appreciated the opportunity to meet, talk to, work with other people from faith groups in Leicester. Only a few passers-by interested to stop and take time to talk, but interesting conversations with those who did. A very worthwhile initiative.”

“Delighted to be involved in this initiative – small steps in sharing faith for better understanding and co-operation. Wish more people were less suspicious when seeing the word ‘faith’!”

“Thank you for inviting me to be part of this inter-faith initiative. Although many passed by only a few people stopped. The couple of conversations I did have, however, with people of different faiths were very enlightening – quality not quantity!”

“Delighted to be part of something so positive. Many people took leaflets and stopped to ask questions. Many positive comments about the display. I think many people thought we were there to convert them, which of course isn’t true and that’s why they were suspicious to come and ask questions. It was an enlightening experience for me and I would happily be part of something like this again.”

“It’s been a very interesting and, if I may use the word, ‘comforting’ week. I have loved the fact that so many people have stopped to read the banners and so many young people have shown an interest in faith.”

At the end of the evening, I have dinner in the Holiday Inn with Maureen, debriefing on the past few days and reminiscing about our shared experiences and common friends in our younger days back in Scotland.
Posted by George M Ballentyne at 22:41